Since the last time I posted (I know, it’s been awhile) life has been pretty busy.

When people say “life has been pretty busy” they are usually talking about how their work schedule has intensified, which mine certainly has. Or they are alluding to the their many social engagements with friends and family; of which I have also had many. However, I can guarantee you that when people normally use this phrase they are not describing a time in their life that was taken over by war.

As many of you are well aware, I live in Israel at the moment. And just a short while after I arrived back in Tel Aviv from my American vacation, a war between Hamas and Israel broke out. I will pass on the details at the moment, but in short, life was pretty busy.

Now that I am no longer dashing to the bomb shelter in the middle of drafting work emails or jumping out of bed to huddle in the stairwell with my neighbors, I am happy to say that I might actually be able to get back to a regular posting schedule.

I don’t mean to gloss over the ordeal that was “Operation Protective Edge,” and I promise to post my experience very shortly. But for now, I thought I would start back up with a post about pizza, because when doesn’t pizza put a smile on your face?

Just because dairy doesn’t agree with me doesn’t mean I have to avoid the deliciousness that is a piping hot pizza crust with sizzling toppings. Last night I made a whole wheat crust, recipe found here, with sauteed veggies.

In America, my go-to pizza crust is the ready-made dough by Trader Joe’s. But this was actually an incredibly simple crust to prepare and even more satisfying knowing that I made it from scratch. 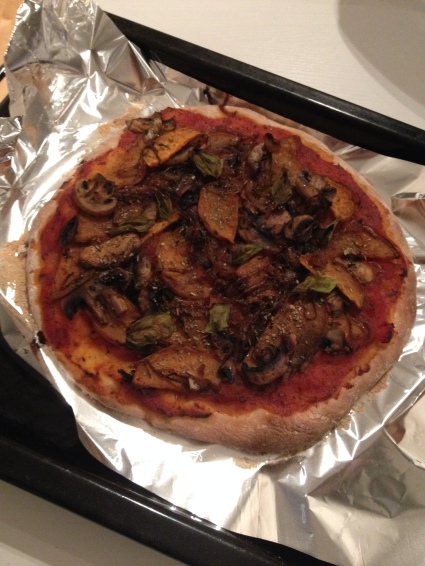 That’s just a taste of what I will be posting on a more regular basis. So if you’re in the mood for some more good eats, updates on life in Israel and yoga inspiration, then stay tuned.

What are some of your favorite toppings? Do you have a favorite crust recipe?

3 thoughts on “Dinner’s On”

Leave a Reply to Melissa @ Bless this Mess Cancel reply